Removal of iron and manganese from groundwater

Since groundwater has an anaerobic atmosphere underground, iron and manganese exist in the form of low-charge ions and are colorless and transparent. However, when pumped to the ground, it develops color by being oxidized by oxygen in the air and oxidizing agents such as sodium hypochlorite, and also produces insoluble inorganic compounds.

In addition to these coloring disorders, if water containing iron or manganese is used, oxides of iron or manganese may adhere to the pipe and block the pipe as shown in the photo below. Care must be taken because if the piping is blocked, problems such as not being able to obtain the specified amount of water and contamination of deposits may occur. 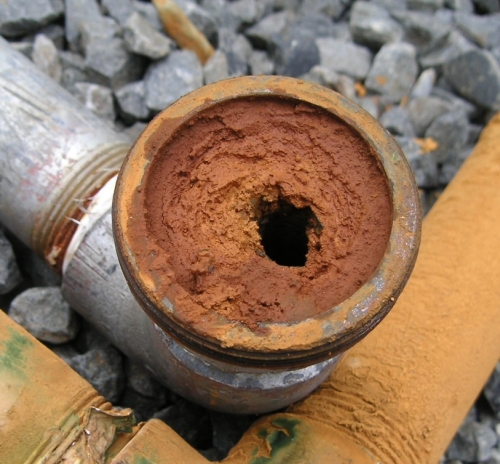 Therefore, if the groundwater contains iron or manganese, it is necessary to remove them promptly. In the case of tap water, it is obligatory to treat iron up to 0.3mg/L and manganese up to 0.05mg/L as a drinking water conformity standard.