The downward flow type sand single layer filtration method using filtered sand is widely used as a general filtration method. However, in recent years, the standards for treated water quality have been strengthened due to concerns about odor control by blue-green algae, prevention of outbreaks of cryptosporidium disease, and deterioration of raw water quality due to disasters, and “filtration”, which is the key point of water purification, is the water purification process. The role played by the company is still large, and further improvement is required.

In the downward flow type single-layer filtration method, the filtration layer is generally expanded by 20 to 30% in daily cleaning, and after cleaning, the particles are precipitated in order from the one with the largest particle size to the one with the smallest particle size. Fine particles are stratified on the upper layer. Since a filter medium with a smaller particle size can remove finer turbid particles, when water is passed through a layer of fine particles, all the turbidity in the raw water is removed only near the surface layer, and the entire filtration layer is removed. It cannot be used effectively. This phenomenon is called surface filtration (surface filtration), and because the filter layer functions as a two-dimensional layer, blockage progresses quickly, causing adverse effects such as a decrease in filtration duration and deterioration of treated water quality. 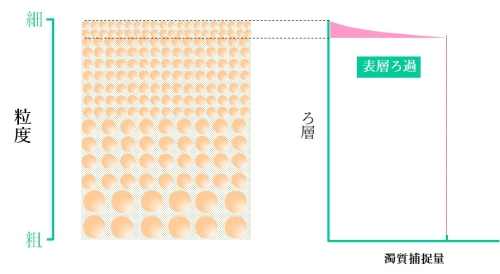 However, ideally, it is desirable to capture the large turbidity in order from the smallest to the smallest, and effectively utilize the entire filtration layer three-dimensionally. Ideally, it should have a reverse particle size configuration. The method devised there is “multi-layer filtration” that uses multiple filter media with different densities. This is because the ideal filter layer is constructed after backwashing by using [filter material with low density and large particle size] and [filter material with high density and small particle size] in the same layer. 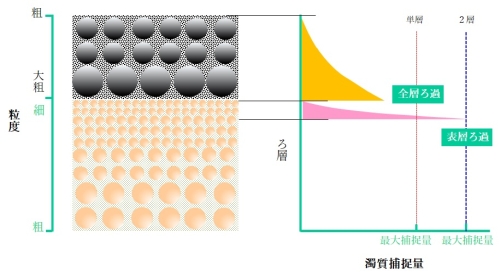