Iron in raw water is 1.0 mg / L and manganese is 0.24 mg / L, which are higher than the tap water quality standard. The raw water also contains chromaticity, but the TOC of the raw water is low, and the results of prior tests have revealed that it was colloidal iron hydroxide, so a flocculant was injected. It can be judged that the chromaticity can be removed to 5 degrees or less by performing physical filtration.
We examined the treatment method so that the target values of treated water were iron: 0.3 mg / L or less and manganese: 0.05 mg / L or less, and delivered the equipment for iron removal and manganese removal towers. 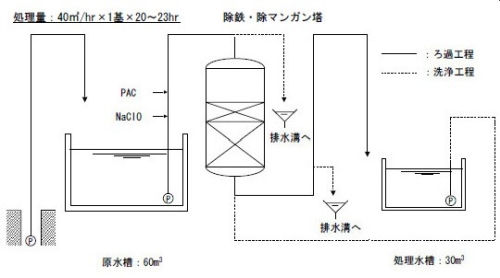 As a result of delivering the above iron and manganese removal equipment, we were able to obtain extremely clear water as shown in the table below and in the photo by removing iron and manganese.
The chromaticity was also reduced to 1 degree by removing iron. In addition, the turbidity of the raw water was already below the tap water quality standard, but it could be removed to less than 0.2 degrees, and it can be said that very good water was obtained.