As a result of delivering the activated carbon tower as described above, we were able to completely remove residual chlorine as shown in the table below and in the photo. 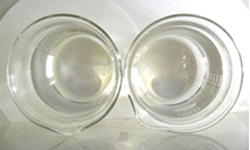